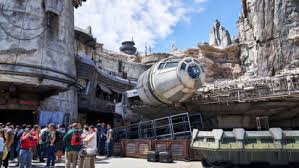 The reservation system put in place for the first three weeks of Star Wars: Galaxy’s Edge in Disneyland has been a huge success. Typically marred with negative reviews due to long, unmanageable lines, crowds that stretch for what seems like miles and what could be deemed a less than magical experience; The grand opening of not only a new attraction but a whole new land seemed to run almost like clockwork with nary a mishap to be uncovered, especially when it came to crowd control and line management.

We’re going to put this out in the universe. Disney World would be bonkers to not implement a reservation system for at least the first month of Star Wars: Galaxy’s Edge. The system has been a massive success in Disneyland and considering a certain other park, who shall not be named, opened a single attraction with lines stretching to the parking lot and a 480 to 600  minute wait time (let that sink in), to not implement a reservation system at Walt Disney is incomprehensible if Disney wants to create a truly magical experience.

Obviously, creating a reservation system for a park that is almost an exact replica of the one in Disneyland but with over fourteen times the amount of people, you are going to have to hone in some things.

Let’s dive into that!

In a nutshell, there are two ways the reservation system can work in Walt Disney World.

Our first option for a reservation system is operating with more blocks of time. For example, 6 am to 1 am, seven days a week for one month or longer. Essentially, Disney had already begun to set up for this, because they have already announced park hours will begin at 6 am every day at Hollywood Studios beginning on August 29, which is opening day of Star Wars: Galaxy’s Edge. Disney would also need to extend park hours each day to that 1 am that we mentioned.

With 36,000 total rooms, we will say, for the sake of argument, that Disney sells each resort at 90% occupancy. When a resort claims to be “sold out” rarely are they actually completely 100% booked, they have to have contingency plans for issues at the resort or needs that arise so they will almost always leave a buffer.

So, the question becomes, can Star Wars: Galaxy’s Edge handle 24,300 guests per day. Our answer is yes! Easily!

Think about this, Disney believes that one of the land’s signature attractions, Millennium Falcon: Smuggler’s Run, will accommodate up to 1,800 riders per hour. 42 guests can experience the ride at a time through the seven “cockpits” within the attraction that seat six people each. That works out to 34,200 guests riding the Millenium Falcon attraction alone in a 19 hour day. That is over ten thousand more guests than we have allocated to go through the entire land per day during the time when the reservation system is in place.

Additionally, for this to work, Disney would have to limit how many guests were given a reservation spot per room. We have averaged it out to three per room, but for this to be successful, only guests registered to the room would be allowed a reservation.

In Disneyland, guests were able to access multiple reservations during their stay some even in back to back days and rooms had “extra” tickets that they were able to give to people not registered in their room. Due to the sheer volume of rooms and resorts on Walt Disney World property, that is not feasible for Disney World.

The other option would be to have certain resorts have reservations on certain days but that puts extra stress on the system because if guests are only staying for a short time , their resort might not fall in the rotation during their stay.

It works. It is a strain on the land and the resources of Disney for sure, but it absolutely works. The Orange County Register has reported that 1400 current Disneyland cast members were selected to shift into new roles in the new land. With Galaxy’s Edge in Walt Disney World, a near replica of the land in Disneyland, we expect Disney World has allocated approximately that same number.

Castmembers would not be able to work full eight hour shifts for a 21 hour operation day (an hour in front of opening and an hour behind closing) but it could be broken down into 3 seven hour shifts or in a number of alternative ways.

We hope that Disney World is waiting to see what happens to Star Wars: Galaxy’s Edge once the reservation period ends in Disneyland. Try it in the smaller theme park, work out the kinks, adjust the numbers, bring on additional staff for the additional operating hours and shorter amount of time the land is closed each day during the reservation period and implement a similar system in the larger Walt Disney World.

Next thing you know, bam! You have yourself a successful opening where guests are able to experience the magic without Black Friday crowds and the press is positive and the reactions outstanding and the guests are happy. This is how you create an opening remembered for epic imagineering and incredible attention to detail and immersion. Instead of an opening marred with stories such as, “Lines Stretched to Disney’s Boardwalk Resort at 2 am on opening day of Star Wars: Galaxy’s Edge”, or “Guests Spend Thousands of Dollars to Wait in Endless Lines for New Star Wars Land”, “Ten Plus Hour Wait Within an Hour of Opening”.